The Festival hosts the 27thedition of the ADCE Awards and will be held in Barcelona on the 9thand 10thof November. 'Rewiring the Creative Machine' is the compelling thread running through conferences, workshops and networking opportunities. Main speakers are Martin Weigel (W+K), Maria Scileppi (Dropbox), Tim Malbon (Made by Many), Pip Jamieson (The Dots), Conn Bertish (Cancer Dojo, Rey Andrade (72AndSunny) and Julia Blomquist (Forsman & Bodenfors). Get your pass now.

The best European professionals of the advertising and design industries return to the Disseny Hub Barcelona for the ADCE Festival: two days – 9th and 10th of November – of inspiring conferences, workshops and networking opportunities. Headlining the ADCE Festival will be the lecture and workshop series titled 'Rewiring the Creative Machine', exploring how creativity and technology reconcile through the "design of new workflows and collaborative processes appropriate to the inherent complexity of creativity", explains Kris Hoet, curator of the Festival and Chief Innovation Officer at Happiness and FCB Global.

The future of creative processes

Acknowledging the true impact of automation and digitalization on a creative process that is chaotic and unpredictable by nature, is the main topic the keynote speakers will address on Friday, 9th of November:

Martin Weigel, Head of Planning at W + K Amsterdam. Under the title ‘The Case for Chaos’, Weigel proposes a survival strategy for creativity "in the midst of the stupidity of orthodoxy, the corporate instinct, the illusion of best practices or the stifling effects of process".
Maria Scileppi, Creative Resident at Dropbox will share stories of setbacks, discoveries and how she has managed to work in what she calls the 'in-between spaces'. In ‘What is the question? That is the question’she will also discuss ingredients for a successful creative collaboration and show how sustainable frameworks for working with others can be created in a setting where team members change frequently.
Tim Malbon, Founding Partner of Made by Many, will share with ‘Everyone’s creative’how his agency opened the creative process to customers and end-users, building a cross-functional model that now involves everyone in design.
Pip Jamieson, Founder and CEO at The Dots, the creative community dubbed the next LinkedIn by Forbes, proposes a conference under the title ‘The Robots are coming! Ten tips to thrive in an age of automation’,where she discusses how creativity can excel in a technology-driven setting.
Conn Bertish, Founder and CEO of Cancer Dojo, -a mobile app that merges creativity, technology and medicine to help cancer patients- will explain‘Why dying made me a better creative’by showing the role and power of creativity in a world full of stress.
Rey Andrade, Creative Director at 72andSunny Amsterdam, will highlight how ‘Creativity needs diversity’and how multicultural and broadly diverse organisations can become potent creative environments.
Julia Blomquist, Planner at Forsman & Bodenfors, will present a conference titled ‘How “tillsammans” promotes creativity’, where she will reflect on how a collaborative approach to solving tasks helps promote creativity.

On the morning of Saturday, 10 November, a curated selection of workshopsdelving into the singularities of the creative process will be available to Full Pass holders. A total of 8, these hands-on workshops aim to inspire and challenge participants abilities at problem-solving, endurance, collaboration, and innovative ways to enhance their inner creativity:

In the afternoon, the Disseny Hub Barcelona auditorium will host the High Potentials session. A challenging and inspiring format designed to help young creatives showcase their skills, make new acquaintances and ultimately, find irresistible jobs. Now in its fourth edition, it brings together emerging new talents with creative directors and HR Managers from highly renowned agencies. During the session, the young participants have the opportunity to present their best work to the public and participate in a 'speed dating' with representatives of various agencies to generate new professional relationships.

The overall results of the first edition of the Creative Incubator programme will be presented during the Festival. To respond to some of the core challenges of advertising and design organizations, ADCE has developed this educational initiative in partnership with Pi School. The programme looks at different triggers that could transform business models and organizational design within the creative industries.

What role do virtual reality, augmented reality, artificial intelligence or machine learning play in the agencies? What are the needs that customers will have in the future? These and other questions were explored in the 3 training modules that were offered in Rome, Barcelona and Berlin over the course of this year. While offering room for reflection, the training programme aimed at re-evaluating current business models and the status quo of the creative industry. Jamshid Alamuti,CEO and co-founder of Pi School and Director at Creative Incubatorwill present the primary conclusionsof this work, emphasizing that the programme is "a unique opportunity to solve tomorrow's problems, uniting technology, creativity and entrepreneurship".

This year the Festival is hosting the 27th edition of the ADCE Best of European Design and Advertising Awards, the only international competition open only to those works that already won at the most prestigious national competitions of the creative and design industry in Europe. As such, this award is considered to be the "Champions League". Submissions can still be made online before 6thof September through awards.adceurope.org.

The winners will be announced on Saturday afternoon and a few hours later the Grand Prix 2018 will be revealed at the Festival Closing Party. 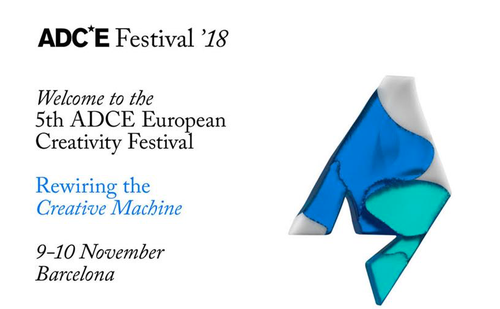